VAR in the Premier League

“It’s a bit soul destroying for the fans but it’s the culmination of a few incidents. I’ve seen it again and VAR is there for that and they didn’t get it right. Harry Maguire should have been sent off, that’s clear, and that obviously changes the game.“ These words were uttered by Frank Lampard on Monday night following his side’s 2-0 defeat at home to Manchester Utd, a result which potentially has huge repercussions for the chase for a lucrative Champions League spot. Of course, Lampard was angry that his side had just lost a massive game, but his comments are shared by plenty of people in the game, from pundits, players, managers and fans alike when it comes to the subject of VAR. So how have we got here, does the VAR system need looking at or should we just get rid of it altogether and go back to placing complete trust in the match officials?

How Does VAR Work?

The Video Assistant Referee System (VAR) was introduced to the Premier League at the beginning of this season (2019/2020). The system was trialled in the FA and Carabao Cups in each of the previous two seasons and had already been employed in Italian and German league football as well as the 2018 World Cup. The feeling was that it worked quite well, clearing up any clear and obvious errors made by the match officials and showing what was happening on a big screen to keep fans in the stadium informed.

In terms of how the system works; The VAR speaks to the on-field referee through an earpiece, or vice versa, and the referee will put his hand up to pause play and inform the players a decision is being reviewed. Then VAR will review the video footage of the incident and advise whether any action should be taken. If there has been an error, the referee will draw a rectangle with his arms to replicate a TV a screen to change his original decision. Then, in theory, VAR will instruct the referee to watch a replay on a pitch side screen. This is known as an on-pitch review. These are the main principles of the system which was used in the World Cup and some European leagues.

Changes to VAR for Premier League

Before VAR was introduced at the beginning of the current season, the Premier League felt it was best that it devised some of its own criteria with the aim of minimising disruption to the ebb and flow of the game. One of the biggest worries about VAR was that it would be too stop-start, with the Premier League known across the world for having a fast paced and relentless tempo. Possibly the biggest decision, however, was the instruction to referees to avoid on-pitch reviews at the pitch-side screen whenever possible. These types of review are known to cause the longest delays. Instead, on-pitch referees have been told to trust the advice they are given by VAR.

The man tasked with leading VAR’s implementation in the Premier League, former referee Neil Swarbrick, also stated before the season that the Premier League would stick to a ‘higher threshold’ for reviewing decisions and only intervene in the case of ‘clear and obvious’ errors. Swarbrick said at the time “It’s different interpretations of the IFAB laws. The different variations we’ve got we hope will stop the long stoppages and the long reviews with the screen.” Great in practice, but has it worked?

How has VAR Affected the Premier League?

The biggest talking point of this season so far, apart from Liverpool’s dominance, is certainly VAR. From the very first weekend, it has caused controversy, anger, surprise and in some cases sheer laughter. It feels like there hasn’t been a weekend gone by without some sort of VAR-induced controversy. It could be an armpit or a leg hair offside, a re-taken penalty, a disallowed goal, there is always something that causes tongues to wag. The problem we have, however, is that fans would rather be talking about a great goal, a great game, the quality of the players, rather than a system where lines are seemingly drawn to try and prove a player was offside by his toenail.

You can see logic in the Premier League deciding to instruct referees to not consult the pitch-side monitor to review an incident, but it has simply not worked. If the equipment is there, surely it is in the referee’s best interest to use it? Would we rather not come to the correct decision even if takes slightly longer, than having a delay anyway and the decision ends up being wrong? As I support a club in the football league, I don’t have the issue of VAR being in use in the games I watch, which I am glad about, but I have experienced it this season. I was in attendance for the Spurs v Chelsea match in December, where lo and behold, VAR was needed and used for game defining moments. Whilst reviewing the two major incidents of the game, a penalty for Chelsea and a possible red card for Son Heung Min, I was stunned as I sat there to not have a clue what was going on, just a screen informing me something was being looked at. In fact, some stadiums, such as Anfield and Old Trafford do not have a big screen, instead waiting for a tannoy announcement. 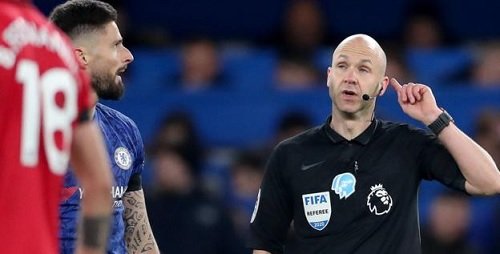 Possibly the biggest affect VAR has had on the Premier League though, is that for many it has taken the joy out of going to the match. That brilliant feeling when your team scores a goal, you celebrate with those around you, utter joy and smiling faces. Unfortunately, those smiling faces are now ones resigned to something being reviewed, an anxious look as they wait to see what the goal will be disallowed for. This is the crux of it. It is taking away the spontaneity of live football and replacing it with anger and bemusement. We don’t go to football to wait for a piece of technology to decide if we can celebrate when our team scores. It cannot be argued that VAR has had a detrimental affect on the atmosphere inside the stadiums.

The Future of VAR in the Premier League

For now, is seems that VAR is here to stay. However, it has been decided that certain changes will be made. According to football’s lawmakers, The International Football Association Board (IFAB), the Premier League is using the Video Assistant Referee (VAR) system incorrectly by utilising it in an attempt to pinpoint close offside calls which take lengthy stoppages out of the game. The organisation has suggested that the Premier League is using VAR against its intention. It is also anticipated that referees will consult with their pitch side monitors more often, with the Premier League now reversing its initial intention for this not to be the case when the season kicked off. Whatever happens, there is a big summer ahead for those in charge to look at the system in its current guise and decide what changes need to be made for next season.

I don’t think it is too dramatic to suggest that VAR has been a nightmare in its debut Premier League season. Too often have pundits been talking about a straight line on a screen deciding if someone is offside, rather than a great piece of play or the actual game itself. Too often have fans in stadiums been left utterly bewildered at what is going on, not knowing whether they can celebrate, or they should be angry or relieved. Of course, if possible, we want correct decisions to be made, but VAR doesn’t even do that. On Monday night, Harry Maguire should have seen a red card for a nasty kick, and even after VAR was used, he escaped. Earlier in the season, Son Heung Min saw red for almost an identical kick. In the same game at Stamford Bridge on Monday, Chelsea had a goal disallowed for an apparent push from Cesar Azpilicueta. When VAR put up the replay, it was clear he was actually pushed into a Manchester Utd player, so the goal should have stood. To the absolute astonishment of those watching, it was still disallowed.

VAR was brought in to avoid the often-inconsistent actions of referees, but it is clear just from the examples mentioned in this article, the inconsistencies remain. Yes, referees are not perfect, and will get things wrong, but football’s laws are subjective. Decisions still come down to human interpretation. Do we want the game to become full of robots removing any emotion from it all? Aston Villa fans could be heard chanting “It’s not football anymore” on Sunday. The problem is this is football now, just not as we know it.