After a shorter two-month break, the Premier League returns for a slightly delayed 2020/21 season as Fulham host Arsenal in the league curtain-raiser on Saturday 12th September.

Liverpool will be hoping to successfully defend their first-ever Premier League title and their first top-flight trophy for the first time in 30 years. But they will face stiff competition from the teams they left adrift in the league in the 2019/20 season. The likes of Chelsea and Manchester City have already made some important moves in the transfer window with just over a week before the season starts and both will be determined to see their investment pay off with a much improved 2020/21 campaign.

Although considered more of the outsiders for the title, Arsenal have shown gradual improvement under Mikel Arteta and secured the FA Cup and the Community Shield in recent months so they cannot be written off. Manchester United’s also looked promising at the back end of last season and they have the foundations to become a force to be reckoned with in the Premier League having hoisted themselves into the Champions League places at the death last season. Tottenham will also be looking to improve in their first full season under Mourinho after a really difficult campaign in 2020/21.

So let’s have a look at some of the early title contenders and the odds bookies have them at.

Following the disappointment of finishing 18 points behind Liverpool last season and being eliminated by Lyon in the quarter finals of the Champions League, Man City will be desperate to put in an improved all-round performance this season.

Having signed Nathan Ake from Bournemouth and the highly-rated Fernan Torres from Valencia, City have added a bit of extra quality and depth to an already talented squad for the coming season with the likes of Kevin De Bruyne, Raheem Sterling and Bernardo Silva, and Riyad Marhez all performing well last season.

Slip ups to the likes of Norwich and Wolves, as well as losses to title rivals Liverpool, Chelsea, and Spurs, cost City dearly last season. If they can maximise their points from fixtures like this in the coming season and put their inconsistencies to bed, City could run away with the title as they have the most talented squad in the league.

Jurgen Klopp’s Liverpool are unstoppable on their day, but a slight dip in form towards the end of last season proved they are not invincible. Their frailties lie in the lack of depth outside the first team as they are extremely reliant on the likes of Sadio Mane, Mohammed Salah, and Roberto Firmino for goals, but also on Trent Alexander-Arnold and Andy Robertson for assists. In defence also, if Virgil Van Dijk suffers an injury, they could be exposed.

Although Liverpool signed the talented Konstantinos Tsimikas at left back as a back up to Robertson, Liverpool have been very quiet in the transfer window. They continue to be linked with Thiago Alcântara which would add some extra steel and composure to the midfield, otherwise, it appears as though Klopp is content with his squad which lifted the title last season. Injuries could cost Liverpool this season if they don’t add reinforcements, they were fortunate in this respect last season, but a lack of depth could be their downfall in 2020/21.

Free from the shackles of last summer’s transfer embargo, Chelsea have moved quickly to improve their squad ahead of next season. Frank Lampard looks eager to add extra quality to his young side, who performed well last season, guiding the Blues to a third-place finish and the last 16 of the Champions League. But their inconsistency and inability to keep the ball out of the net meant they fell just short of an excellent season.

Despite being a strong team with a fantastic blend of talented youth in Mason Mount, Tammy Abraham, Christian Pulisic, and Reece James and now experience with the addition of Thiago Silva and Hakim Ziyech, this may be a bedding in period for Chelsea, who have made six additions already this summer. Chelsea also have the likes of 19-year-old Ethan Ampadu, who performed exceptionally at RB Leipzig on loan last season, returning and the possibility of Kai Havertz arriving, which could add further selection headaches for Lampard. 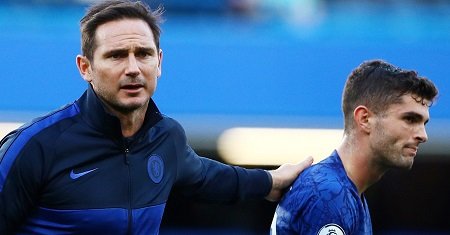 Such amount of transition always takes time to yield results. The Blues may start slowly but pick up towards the latter stages of the season. However, they are definitely a strong outside choice for the title, but their chances will depend on how well they start the season as they have enough depth to compete on all fronts.

Manchester United put their early-season struggles behind them towards the end of the 2019/20 campaign. They finished as the most in form team in the league and achieved an impressive fourth placed finish. This was largely the result of Ole Gunnar Solskjær’s persistence with his young players and finding a settled starting 11 for the second half of the campaign. The likes of Mason Greenwood, Marcus Rashford, and Anthony Martial have benefitted under Solskjær, while a settled back four of Luke Shaw, Victor Lindelöf, Harry Maguire and Aaron Wan Bissaka impressed and developed a good understanding in the latter stages of last season.

However, United still feels like a work in progress under Solskjær, and missing out on potential marquee signing Jadon Sancho will be a big blow, he could have been that extra spark of top-quality they missed at times last season. United still have not signed any new players this summer, despite one of the teams in the Premier League who do currently have plenty of spending power, and it feels they may need one of two top players extra to really compete for the title this season.

Arsenal have slowly and quietly gone about their business recently and appears to be re-building nicely under Arteta. The Spaniard will be raring to go in his first full season as manager and will be keen to implement a bit more defensive solidity for the Gunners, after brining in Pablo Mari permanently and recently signing Gabriel Magalhães from Lille, whilst also recapturing their fluid, passing identity. Winning the FA Cup final against Chelsea, whilst also comprehensively eliminating Man City in the semi-finals, showed how threatening Arsenal can be under Arteta’s leadership.

Signing Willian from Chelsea was a big coup for Arsenal and the Brazilian will add both quality and experience to compliment Pierre-Emerick Aubameyang and Alexander Lacazette up front. A number of young players also forced their way into Arteta’s plans last season with Bukayo Saka particularly flourishing, while the likes of midfielder Joe Willock and striker Eddie Nketiah have proved they are capable of holding a place in the Arsenal squad.

Similar to Chelsea, this season may come slightly too soon for Arsenal to lift the Premier League, but if they make a consistent start and Arteta maintains his stubborn approach to oust any players unwilling to pull their weight, then Arsenal could make headway in the title challenge.

Tottenham will be desperate to put their 2019/20 campaign behind them and start again this season. A poor run of form and a horrendous injury crisis saw Spurs slip down the table in early 2020 under new manager Jose Mourinho. However, they finished in good form which provided just enough points for them to clamber into the Europa League qualifying places.

The signings of Matt Doherty and Pierre-Emile Höjbjerg will be particularly important as they will add proven top-flight experience to areas of Spurs’ squad which were lacking last season. Doherty will provide pace, width, and energy on the right flank, which he displayed regularly for Wolves, and provide stiff competition for an inconsistent Serge Aurier. Höjbjerg will sure up the midfield and gives Mourinho more solidity in those key central areas.

Spurs’ only chance of challenging for the Premier League title this season is if they keep Harry Kane fit, or if they can sign a striker good enough to challenge him. Kane is the club’s only recognised striker, with the likes of Son Heung-Min and Lucas Moura filling in up front for Kane when he was injured. Mourinho will certainly sure up Spurs’ defence next season which will return some results, but Kane is their main man and they must keep him fit in order to succeed.