The Premier League continues this weekend with a number of important fixtures at both ends of the table. Everton will look to gain points on Manchester United in the race for Europe. Tottenham and Wolves will also be battling for the top four as they meet this weekend. In the bottom half, Brighton face Crystal Palace with both teams looking to move further away from the relegation places while West Ham know a win over Southampton will take them out of the relegation zone.

New customers only. 18+, BeGambleAware.org. Minimum deposit £10. Place any sportsbook bet (except Racing) of £20+ at minimum odds of 1.40 (2/5) to receive your free bets and casino bonus. 35x wagering on casino bonus. Free bet will expire 7 days after opt in. £20 Casino bonus will expire after 30 days of opt-in. Full T&Cs apply.

Brighton have improved in recent weeks with three consecutive draws, but are still without a win in seven Premier League matches and have secured just one win in their last 12. Graeme Potter’s side are unbeaten in their last four at home with one win and three draws.

Crystal Palace won their first game in eight with a 1-0 win over Newcastle last weekend. Palace have scored only twice in their last four matches and kept just one clean sheet in their last nine matches. Palace are without a win in their last six away games and have only won three out of 13 away games this season.

Jose Izquierdo is rules out for Brighton with a knee injury but Dale Stephens could return from a thigh injury. Luka Milivojevic and Cheikhou Kouyate look set to return for Palace after missing the previous match through injury. James Tomkins (thigh), Jeffery Schlupp (groin) and Mamadou Sakho (thigh) are all ruled out.

Both teams are in poor form and will be desperate for a win over their rivals. However, this one looks likely to end in a draw with a tight match expected.

West Ham came close to securing their first win since New Years day against Liverpool but gave away a 2-1 lead. David Moyes side have now picked up two points from a possible 24 from their last eight Premier league games. The Hammers’ only win in 2020 came at the London Stadium, but they have only gained 12 points in 13 games at home this season.

Southampton won their first game in five attempts with a 2-0 win over Aston Villa last weekend and lost their previous three in all competitions before this. The Saints have one of the best away records in the league this season. They won four of their last five away fixtures and have only failed to score twice in 13 away Premier League fixtures.

Jack Wilshire (groin), Ryan Fredericks (shoulder), Andriy Yarmolenko (thigh) and Tomas Soucek (groin) are all out for West Ham. For Southampton, Nathan Redmon will be unavailable due to a groin injury but Kyle Walker-Peters could return from a calf injury.

West Ham looked better against Liverpool on Monday but mistakes are costing them this season and Southampton may gain a narrow victory in this fixture.

Everton are one of the most in-form teams in the league. Their loss to Arsenal last weekend was the first in six matches in the Premier League. The Toffees are unbeaten in their last six home matches, winning six and drawing two. Only rivals Liverpool have better home form in the league than Everton. 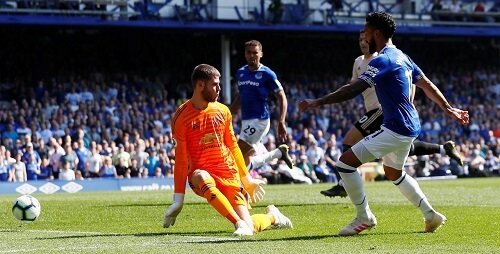 A resurgent Everton take on Man UTD this weekend

Manchester United’s form is improving and they are unbeaten in six matches in all competitions. The Red Devils have secured seven points from their last nine available. They scored five and kept three consecutive clean sheets in this time. United have struggled for consistency away from home this season, winning only four games and losing three of their last five.

Lucas Digne and Theo Walcott are likely to return from injury for Everton but Jean-Philippe Gbamin remains out with a thigh injury. Marcus Rashford (back), Paul Pogba (ankle) and Lee Grant (knock) are all ruled out for Manchester United and Timothy Fosu-Mensah is unlikely to feature due to a thigh injury. Axel Tuanzebe may return from a thigh injury.

Everton’s home form will help them to beat Manchester United this weekend. Despite United’s improvement, they are still showing some inconsistency which will see Everton gain all three points.

Tottenham lost their last two consecutive fixtures in all completions for the first time since early October. Their loss to Chelsea last weekend was their first in five games. Jose Mourinho’s side have earned 26 points at home this season, but two of their three losses have come in the last five matches at the Tottenham Hotspur Stadium,

Wolves are unbeaten in their last four matches in all competitions and haven’t conceded a goal in these fixtures. Nuno Espirito Santo’s side have lost only one match in their last six in the Premier League. Wolves have only lost three league games away this season, but two of these have come in the last four matches.

For Spurs, Harry Kane (hamstring), Moussa Sissoko (knee), Son Heung-Min (arm) and Juan Foyth (groin) are all out long term but Ryan Sessegnon (knock) could return. Wolves have a fully available squad, but Jonny looks unlikely to feature due to an ankle injury.

Spurs are struggling with injuries which has affected their form while Wolves are coming into good form. However, Spurs’ home record will see the points shared between these two sides.