The high-octane Christmas period of three league fixtures and an FA Cup match has come to a close.

This weekend sees the return of Premier League action with plenty at stake. Tottenham take on unbeaten Liverpool, can Jose Mourinho be the first to upset Klopp’s side? At the other end of the table, a resurgent Watford under Nigel Pearson face a Bournemouth team who are tumbling down the league, while West Ham will be hoping to distance themselves from the drop zone as they face a Sheffield United side who struggled over the Christmas period. Manchester United, Wolves and Chelsea will be looking to cement European football for another season as they all face lower table sides.

Despite playing some excellent football, Brighton have only won one match in their last six. Their away form this season has been particularly bad as they have only won twice on the road all season and have secured just one win in their last 10 away league fixtures.

Alex Iwobi (thigh) and Jean Phillipe Gbamin (hip) remain out until mid-January and André Gomes will be out long term with a broken leg. Dan Burn (shoulder) and Jose Izquierdo (knee) will be unavailable for Brighton.

Everton look much more assured under Carlo Ancelotti and their home record is good, but Brighton, despite their poor away record, have shown the occasional upset this year so could be backed for a draw.

Norwich have shown some improvement recently and picked up good points against Tottenham and Crystal Palace over the Christmas period. However, they still haven’t tasted victory in eight matches and have only earned five points on the road this season. 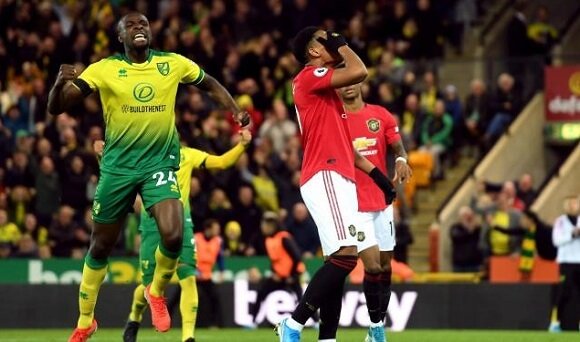 A struggling Manchester United take on Norwich this Saturday

It’s difficult to look beyond Manchester United for this fixture. Despite Norwich’s improvement, they will struggle at Old Trafford and the Red Devils will win comfortably, but may concede.

The new manager effect for Tottenham is showing signs of wearing off as Jose Mourinho’s side only managed to earn four points from a possible 12 over the Christmas period and they have only kept one clean sheet in Mourinho’s nine Premier League games so far. But Spurs have only lost twice at home all season.

Liverpool are the team to beat at the moment having won their last 11 league games. They have also not conceded in their last five Premier league fixtures and scored 12 goals in these games. Jurgen Klopp’s one draw this season came away from home in October, but they have won their last four away games.

Jurgen Klopp’s Liverpool seem unstoppable and they have a good recent record against Spurs, winning their last head to heads. But Spurs’ home form will play in their favour and Mourinho has shown time and time again how he can mastermind shock results which could result in a draw here.

Bournemouth’s terrible run of form has left them in 18th position in the league. In their last 10 fixtures they have won once, drawn once and lost eight, including their previous two fixtures. Eddie Howe’s side have scored just two goals in their last seven matches.

Nigel Pearson has made an unbeaten start to his Watford career as they have picked up three wins and a draw in his four games so far. They have managed to concede just two goals in these matches and have scored seven. However, they have only won once away all season and have failed to win in their last four away fixtures.

Both of these teams are plagued with injury so it could be a tense, scrappy game resulting in a hard-fought draw with both teams aware that dropped points could see them in further trouble at the bottom of the table.

Follow us on Twitter @BettingWorx and never miss out on our free Premier League Previews, betting news, free bet info, promos and more!

It’s almost upon us, the ‘Holy Grail’ of steeplechase horse racing, the Cheltenham Festival takes…