Managing at one of the biggest, most popular clubs in the world is always going to be a tough task for any manager, regardless of experience. Just ask Jose Mourinho. There was huge support for OGS when he took over the reigns from a downcast UTD squad, but 13 months on, the team is struggling. Off field business may be going well with the Woodward revenue train steaming on, but on the pitch, the team is in dire straits and fans appear to have had enough.

Is Solskjaer out of his depth?

“I can’t sit here and do anything but hold my hands up and say ‘that’s not good enough for Manchester United’ but that’s where we’re at with all the players”. Words uttered by Ole Gunnar Solskjaer following a 2-0 defeat against Burnley at Old Trafford. Perhaps the most pertinent point to make is that this result was not really a shock. This was Burnley’s first victory at Old Trafford for 58 years, but pundits and casual football fans alike simply shrug their shoulders when Utd lose these days, quite a reverse from the glory years of Sir Alex Ferguson, when an away team winning at Old Trafford was as likely as a politician telling the truth. This most recent defeat was set against the backdrop of a half empty stadium, and fans directing their anger at Ed Woodward, the Executive Vice Chairman, who has overseen a massive financial outlay on players with very little returns. So is Solskjaer out of his depth, or do the problems run deeper than that?

A club struggling to regain past glories

The facts don’t lie, since ‘Fergie’ left in 2013, United have struggled to find an identity both on and off the pitch. For so long they were held up as the example to follow. A mammoth football club which trusted their youth (Beckham, Giggs, Scholes) signed the best young players and turned them into superstars (Ronaldo) had the best manager and the best stadium. It was inevitable that when Ferguson left there would perhaps be a transitional period, a few bumpy years. However, no one could foresee the scale of problems United have faced. Managers have come and gone, from David Moyes to Louis Van Gaal to Jose Mourinho and now Mr Solskjaer. All have tried and failed to restore the club to where it feels it deserves to be, at the very top of the football pyramid. A second place finish in the Premier League and a Europa League success is as good as it’s got in the last 7 years.

In a statement that should resonate with those in the boardroom and in the stands at Old Trafford, during his time at United, Mourinho remarked that finishing second was perhaps his “greatest ever achievement in football”. This is a man who has won the Champions League twice, along with countless other trophies. Perhaps he was being mischievous, which wouldn’t be out of character, or perhaps this was a message sent to the board, a message that says it’s impossible to deliver the success they expect in the current circumstances. Much of the fans ire these days’ points directly to Mr Woodward. It is widely regarded that he is not a ‘football man’ that he favours sponsorship deals and would rather the accounts be full to the brim over the trophy cabinets. To further this line of thinking, former manager Van Gaal commented “At Manchester United, Ed Woodward was installed as CEO – somebody with zero understanding of football who was previously an investment banker. “It cannot be a good thing when a club is run solely from a commercially-driven perspective”. 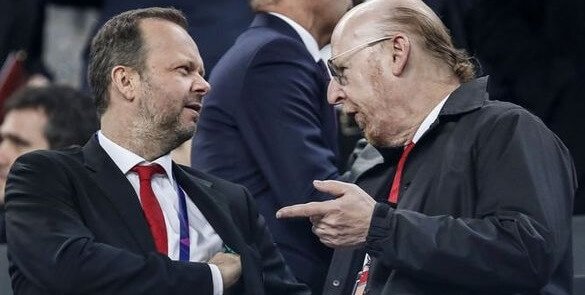 Ed Woodward and the board have once again backed OGS

Ole’s at The Wheel

When Mourinho left under his usual acrimonious circumstances, the club turned to a former player to steady the ship and put smiles back on faces. Ole Gunnar Solskjaer, ‘the baby faced assassin’ himself was appointed on a temporary basis. His only previous managerial experience on these shores was at Cardiff City, where he was unable to keep them in the Premier League and left to head back to Norway. Most felt it was a move to appease the fans in the short term, but long term they would need to look for someone with a better track record. However, there was an instant upturn in results, the fans were smiling again, Paul Pogba started to look like the player they spent £90million on. The board had a decision to make. Do they capitalise on this and appoint Solskjaer full time, or wait until the summer and assess the options? They chose the former and Solskjaer was confirmed as the new full time manager in March 2019.

Should he stay or should he go

Since he was appointed full time, United have lost more Premier League games than they have won with the 46-year-old at the helm. Defeat against Burnley was their 8th of this season, and the chance was missed to close the gap on fourth placed Chelsea to 3 points. The real danger is a sense of apathy creeping in. The stadium was half empty well before the referee put United out of their misery on Wednesday evening. It is hard to dislike Solskjaer the man, he is polite, welcoming and has a deep affection for the club. The problem is deeper scrutiny over his credentials leaves a lot of questions. Can a man who failed at Cardiff, and who’s only other managerial experience has been at Molde in his native Norway, really be in charge of one of the biggest football clubs in the world. The fact that a certain Argentine is currently sitting at home with his feet up watching Netflix only adds to the growing voices that United should remove him. For now, Ole remains at the wheel, the problem is he is driving the wrong way.