Jose Mourinho & Tottenham: A Great Fit or a Marriage of Convenience?

“I prefer not to answer. To speak about the VAR and the referee, Mr Oliver and Mr Kevin Friend, I go in one direction that I don’t want to go”. Those were the words uttered by Jose Mourinho following his Tottenham side’s 0-0 draw at Watford on Saturday.

The result leaves them in 8th place, 8 points from a Champions League place. It is not the first time he has been spiky and seemingly bitter in an interview, and surely won’t be the last. Indeed, fans of Chelsea, Real Madrid and Manchester Utd can attest to the fact that when things don’t go his way, Mourinho can fall out with just about everybody (club doctors included). With that in mind, when he was appointed as Tottenham manager on November 20th, a lot of eyebrows were raised. Can the once happy and amiable manager bring success to a fan base longing for that elusive trophy, or will there be an implosion we have seen all too often with Jose Mourinho led sides?

The fact that Mourinho replaced an extremely popular manager will not help his cause initially with an already sceptical fan base. Mauricio Pochettino, the affable Argentine, was much loved by Spurs fans. He created an identity and a way of playing not seen at White Hart Lane in many years. Before Pochettino waltzed into N17 from Southampton, Spurs were seen as a club that played good football, but were too often easy to beat, and were never really in the hunt for the games major honours. Easy on the eye, but lacking the steel necessary to get over the line. This line of thought is echoed by Sky Sports’ Gary Neville, who often proclaims “Everybody likes playing against Spurs”. The remit for Pochettino was to take Spurs from Europa League regulars to dine with the ‘big boys’ of the Champions League.

He did just that. Suddenly, teams were starting to take Spurs seriously. They were challenging for honours. They had one of the best strikers in the country in Harry Kane. They had exciting young talents such as Delli Alli, they were easy on the eye, everything was set up for success. Alas, like so many Tottenham teams of a bygone era, that success, in terms of trophies at least, alluded Pochettino. Twice they had the league title in their grasp and twice they let it slip. Cup semi-finals ended in disappointment. They were so close but couldn’t make the final step. It all built up to the crescendo of the Champions League final last year. Spurs weren’t supposed to be there. But against all odds they had found a way to European club football’s showpiece event. A chance for Pochettino to cement his legacy. However, once again, Spurs froze on the big stage. Liverpool were too strong and comfortably ran out 2-0 winners. For Spurs and Pochettino, this was the beginning of the end.

A rocky season so far

This season has been a tumultuous one. Amongst massive unrest, a string of poor results and rising tensions, Pochettino was sacked. The claim from the football masses was he took Spurs closer to the top, but the old adage of them being too weak mentally to land the big trophies persisted. They needed a serial winner, someone with experience of winning the biggest competitions. Enter Mr Mourinho, the self-proclaimed ‘special one’, or is that the ‘happy one’ these days? Either way, his appointment was met with a lot of opposition from several Spurs supporters. After all, this is a man who has managed their bitter rivals Chelsea on two occasions, and who recently left Manchester Utd under less than ideal circumstances. He has a reputation for negative football, of falling out with players at the drop of a hat. It was a massive shift in direction from the previous manager, but is that perhaps what is needed?

It is argued that with Mourinho taking charge, the mentality problem can be sorted. The Portuguese tactician almost drills his players into being resilient and gritty, qualities that are associated the most with teams that win trophies. It is often said, “The sign of a good team is when they win and don’t play well”. Mourinho has a proven record of grinding out the gritty 1-0 wins that are needed during a long season. However, will this endear him to those fans who are already on the fence over his appointment? Spurs fans have become accustomed to a free flowing brand of football over the last few years, playing a high tempo, high pressing style that is pleasing on the eye. Are they willing to accept a more pragmatic approach if it ultimately leads them to a trophy? 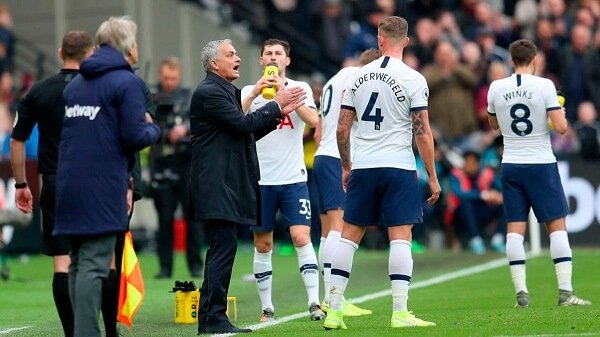 Was Jose really the right man to take over at Spurs?

Also, what of the baggage he brings? It often feels as if you are part of a pantomime when you hear the Portuguese speak at times. When managing Manchester Utd, he had this to say on left back Luke Shaw “He [Shaw] had a good performance but it was his body with my brain. He was in front of me and I was making every decision for him.” Not exactly a ringing endorsement. In a complete contradiction to his predecessor, Mourinho favours finger in the face over an arm round the shoulder. He expects players to respond to his ‘tough love’ style. This approach may have worked 10 or 15 years ago, but players these days have big wage packets and big egos. A more ‘softly softly’ outlook is needed. Perhaps even the man himself has realised this, recently stating he has “learned from past mistakes”.

Will it be a happy ending?

Whatever happens, there is no doubt it will be interesting watching it unfold. We have a grand old club, recently moved into one of the best stadiums in the world, aiming for the success that will match its now grand surroundings. So they have turned to someone who once upon a time guaranteed that success. A man who used to call himself special. A man who claimed on his arrival at Tottenham “I couldn’t be happier and if I was not as happy as I am, I wouldn’t be here”. How long that happiness will last is anyone’s guess. A club that is striving for success has found a manager looking to recapture past glories. With Mourinho there is no middle ground. It could be a perfect marriage or a sour separation.

*odds correct at time of posting